If you know me at all, you know that as for me an my house, we watch soccer.

So sit back and enjoy while I show you why this sport is so much more like life:

Almost all of the major American sports have prodigious breaks in them. Though an entire game lasts well over 2 hours, each individual play takes mere seconds, and over the whole of a game this adds up to about 11 minutes total of play. The rest of the time is taken up with commercials, penalties, and various breaks in the action.

By contrast, there are notoriously really no breaks in the action of a soccer game. Commercials are only broadcast at halftime, and if you risk getting up and going to the bathroom at any point in the 90 minutes of play, you risk missing the play that changes everything.

And just like soccer, life doesn’t really stop. Oh, we can pretend it does by trying check out a little here and there, but like it or not, while we are still drawing breath we are in the flow of time, and learning to be present for all of it is an art.

2. It’s a Lot More Physical Than You Think

Because of #3 below, a lot of people think that soccer is played like ballet, and there is no physical contact. Especially on the youth level, it’s enjoyable to listen to parents unfamiliar with the game complain to referees about how their kids are being pushed around. However, as soon as you watch a game close up, you realize that this game can be brutal: elbows, fists, even teeth(!) are all a part of fighting for position. Players routinely get heads split open (to be stapled up and return to the game), and bruised by well-placed kicks. What’s more, a lot of teams have “a hard man,” or enforcer, who’s job it is to intimidate and generally make the other team’s players miserable. Vinnie Jones (of Lock, Stock, and Two Smoking Barrels fame) was a notorious hard man in the English Premier League, and a  shows the essence of what it means to be an enforcer. 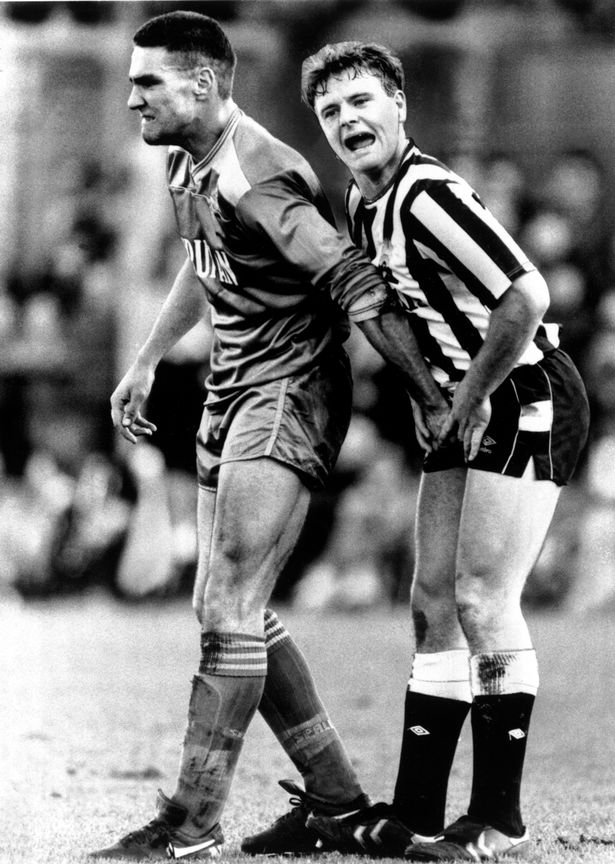 For us, I think a lot of us still adjust to the fact that life is difficult, and struggle to react to pain and challenge. I know for myself, it took a long time for me to get over the fact that life simply isn’t that easy. However, once I was able to start conceptualizing that “in this life I will have trouble”, I was able to start viewing the bumps and bruises that came my way as opportunities for growth, and a “school,” or testing ground of sorts, for my faith. At that point, suffering can become productive, and even redemptive.

3. That Being Said, We “Flop” a Lot More Than We Should

I get it; soccer also has notorious actors and “flops” in it. They are attempts to get fouls called, particularly inside the 18 yard box, so that teams can win a free kick and an easy opportunity to score. There are some hilariously bad flops, when players dive through the air like they’ve been shot with a gun, and then writhe on the ground in excruciating pain, only to have the replay show that they were never even touched by an opposing player.

These type of actions get a lot of ridicule from soccer skeptics around the world, but maybe only until we realize how much we do this as well.

I know for myself anyway, there are so many interactions that I’ve had that have just seem like the world has ended, and I am “devastated” or “enraged” … friendships have been jeopardized. The heat of the moment takes over. I am metaphorically “on the ground, writhing in pain.” Then, often in what is comparatively a really short time, I’m back on my feet, and I actually realize that what I thought was a really major incident, actually didn’t hurt me at all. In fact, I really didn’t even need to fall over or go down. I over-reacted. I let it get the best of me. (And maybe, just maybe I could have scored if I would have ignore the altercation and just gone on with my life.)

Lastly, soccer/football truly is a world sport. Obviously, it’s played all over the world, and the numbers show it: by comparison, whereas the 2014 Super Bowl had 111.5 million viewers worldwide, by contrast the 2014 World Cup boasted 909.6 million.

Watch any professional league, and the rosters are truly glimpses of a global community: Africa, Latin America, Europe and the Middle East are all represented (Sadly, North America (minus Mexico) is probably the least represented continent, at least in Europe).

What’s more, even amidst all the diversity, cultures around the world still maintain (more or less) their own brand of play. The English Premier League is a league of speed; Brazilian football still maintains the reputation of being beautiful and creative (in the United States, a lot of our reputation has at times unfortunately been centered on individualism and show-boating). On and on the list goes on. It’s a wonderful blend of cultural identity with diverse influences.

Like it or not, our world is beautifully complex, and it was created that way. Revelation 7 speaks of “every nation and tribe” gathered around the throne of God, worshiping. It’s too easy to think that my Caucasian, North American perspective is all that there is to life, to faith. But it’s not. It’s so much bigger than that. I can learn about life (and about my blind spots) by people who are not the same as me; who share different life experiences and who have different values than me.

When my son was learning to play the game, we used to take as many opportunities as we could to get him playing time, so even when his club team wasn’t in season I would take him to fields around town to see if he could play in pick-up games. Most of the time, the only games available to him (even as a 12 and 13 year old) were games that international grad students from FSU would hold on Saturdays and Sundays. He would say to me, “Dad, I really want to play,” and I would look at the field full of people from Ghana, Argentina, China, Mexico, and Lebanon, and I would listen to the amazing blend of accents and language, and I would say, “Well, then you need to go out there and play.”

And he would wonder into this blend of culture and language and perspective, and he would go play.

And I’m hoping that he’s learning something about the world, and about life: about the joy of diversity, and the gift that other people can bring to us.

One thought on “4 Ways that Life is Like Soccer”