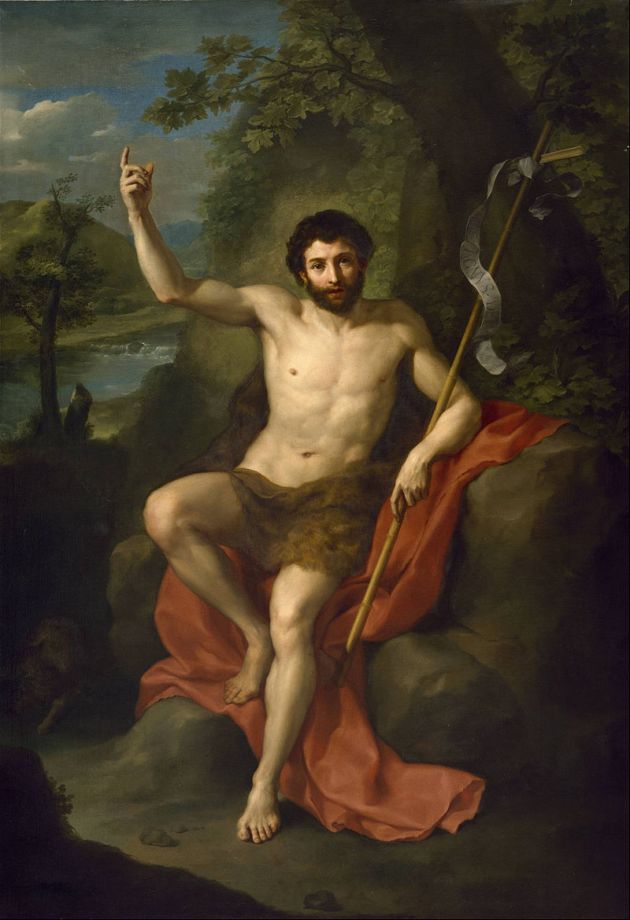 “St. John the Baptist Preaching in the Wilderness” by Anton Raphael Mengs

I was reading a book recently by a popular Christian leader, and he had this to say about John the Baptizer:

Several things about John stand out right away. He was an unusual dresser with strange eating habits. Just in case you’re uncertain, wearing clothes made of camel’s hair was not the height of fashion, even during the time of Jesus. We are told he ate locusts and wild honey. I suppose the wild honey was to help get the locusts down. (Erwin McManus, The Barbarian Way)

Overall, I get what the point he was trying to make: John (as well as Jesus) was a provocative character. However, I think McManus overlooked a crucial point. First, this is what the New Testament actually says about John’s dressing habits:

In those days, John the Baptist came, preaching in the wilderness of Judea…. John’s clothes were made of camel’s hair, and he had a leather belt around his waist. His food was locusts and wild honey. (Matthew 3:1, 4-6)

Second, Jesus has this to say about John:

For all the Prophets and the law prophesied until John. And if you are willing to accept it, he is the Elijah who is to come. (Matthew 11:14)

Lastly, notice this description of Elijah—a prophet—from the Hebrew Bible (our Old Testament):

When you consider the thread between those three passages, you begin to notice that something else may be going on which is  a bit beyond the outsider, “barbarian” nature of faith (which I happen to believe in, by the way). If John was conscious dressing like Elijah—and I believe he was—the Baptizer wasn’t merely trying to shock people; he was trying to signal something to them, namely, here comes a prophet.

Prophets were a unique breed in Jewish culture; they showed up to put the people (and, more specifically, the religous and political leaders) on notice that they had strayed from the Instruction (Torah), and (most often) that they were neglecting the poor and the outsider. Moreover, prophets tended to embody their message, meaning that they didnt’ just speak or write it; oftentimes they acted it out, in sometimes disturbing (and thoroughly gross) ways: nakedness, human feces, and broken pottery were involved.

When you understand the message that John was bringing to the people around Jerusalem, it’s pretty easy to see that he (and later his cousin, Jesus) saw himself as carrying on that tradition.

So when the people of Jerusalem came down to the Jordan river, their reaction actually wasn’t, “Wow this guy is weird.” Rather it was more like, “Wow, there’s a prophet!”

John made perfect sense in his context.

However, as I thought more about this passage and what it said, I actually became troubled on a different level. I started to wonder what this approach to people in the Bible (“Wow these people were weird! They were like from another planet! You wouldn’t even know what to do with them!”) actually says about God and His mission in the world.

You see, the more that we turn people in the Bible into something resembling spiritual space aliens, the easier it is to convince ourselves that there is something unique and special about “those people,” something that we ourselves could never measure up to.

Nothing could be further from the truth.

One of the names that Jesus embodies for believers is “Emmanuel”, or “God-With-Us,” and that phrase means everything, because it is the essence of the Gospel: God enters into humanity, takes on our limitations, embraces our junk and dirt, walks through the muck and the mire of life on earth and ultimately says, “You are okay.”

As Church father Athanasius put it, “God came down to humanity in order to raise humanity up to God.”

Let me spell it out clearly: The Incarnation (“God-With-Us”), along with the Biblical record, means that Jesus (and John the Baptist) made perfect sense in his context. It means that God is somehow perfectly at home within humanity. Now, it doesn’t mean that Jesus wasn’t provocative, or that he didn’t stretch people’s perceptions or understandings.

But he certainly wasn’t a space alien.

You make perfect sense in the 21st century.

What does God want to do through you?

4 thoughts on “How Weird WAS Jesus? ”